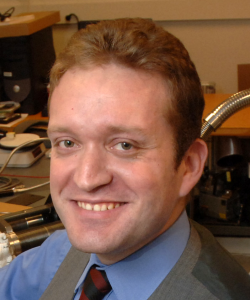 In 2004, after completing his studies, Dr. Velásquez-García became a Postdoctoral Associate with the Microsystems Technology Laboratories (MTL), where he was appointed Research Scientist in 2005, and Principal Scientist and Core Member of MTL in 2009. Dr. Velásquez-García is an expert in micro-and nanofabrication technologies, and his research focuses in the application of micro- and nano-technology to multiplexed scaled-down systems to attain better performance. He has conducted research in micro- and nanotechnology applied to a wide range of topics including electrospray, field electron devices, 3-D HV packaging, mass spectrometry, propulsion, and chemical reactors. He has authored more than 45 journal publications and 80 peer-reviewed conference proceedings, and he is the holder of 12 patents on MEMS technologies. Dr. Velásquez-García is a senior member of the Institute of Electrical and Electronics Engineers (IEEE), senior member of the American Institute of Aeronautics and Astronautics (AIAA), and full member of the honor research society Sigma Xi. Dr. Velásquez-García served as co-Chair of the 15th International Conference on Micro and Nanotechnology for Power Generation and Energy Conversion Applications (PowerMEMS 2015), held in Boston MA in December 2015.